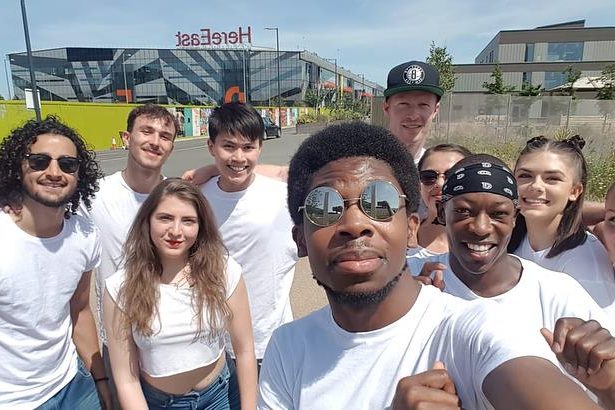 Our pro squad, Manifest Nation, just released their summer video entitled, ‘No More Tears’. This piece choreographed to Ariana Grande’s ‘No Tears Left To Cry’ by T Damien Anyasi, features Angelika and Mok as our feature characters. We also introduce new faces Esme, Alexandra, Macaulay and Marcella in their first video with the squad.

“I was home on a Friday night listening to Spotify (which is uncommon), and there’s a playlist for new music. This song (‘No Tears Left to cry’) comes on and I freeze in the seat. The vocals, the chorus, the instruments – everything is just FRESH. I play the song more than 3 times and tell my housemate, “I gotta create”.

“5 minutes later I’m in the car park freestyling to the song (videos available!) and some ideas start to develop. I went to training with the crew that Sunday and we started work.”

We did a reconnaissance  mission of Hackney Wick the night before the shoot. We asked Bismark Anobah of F.O.E. Films to shoot and direct and film us. The sun was blazing, but we managed.

Angie and Mok’s chemistry on screen was super fresh and, in fact, Mok has a habit of scoring roles. In this video shot back in Manifest Nation history, Mok plays a major character again. It’s good to know your super powers! This is further reflected in the fact that Bismark was behind the camera then too.

I’d like to say the shoot had hard parts, but honestly, the team were well rehearsed. This reflected in the quick turnaround of the video (and we were thankful in that heat!)

Tell us if you enjoyed the project and why! Stay tuned for more news on our developing squad and by watching you support them. We are proud!